Ankara dependence on Russian energy has a negative impact on the implementation of Turkish ambitions in foreign policy, where the interests of Turkey and Russia are not the same on several important issues. However, we must remember that Russia is also dependent – on the Turkish money for gas and oil. 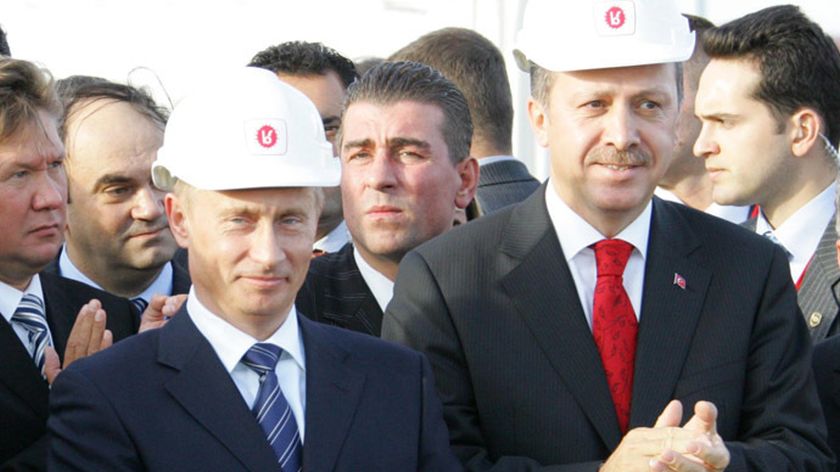 Turkey is a country that has claims to be recognized as a regional leader. Realization of these ambitions is promoted by a unique geographical position at the border of the two parts of the world – Europe and Asia. As a result the activities of the state in various fields aimed primarily at using this factor to improve Turkish status in the international arena.

Ankara’s energy policy is not an exception. Proximity to the oil and gas rich areas of the Middle East and the Caspian Sea on the one hand, and access to the important European market for their consumption – on the other, can strengthen Turkish status as energy hub. At the same time the Republic is entirely dependent on energy imports. Lack of energy independence is an important factor that influences Ankara’s policy, especially in modern conditions when energy factor is widely used as an instrument of pressure and diplomatic weapon.

Talking about the energy sector of Turkey’s foreign policy, there are two vectors of its development. The first concerns the intensification of relations with the leading exporter of energy – the Russian Federation. The second aims to implement alternative energy projects.

Despite the recent popularity of the latter in the media, today Russia remains the main partner of Ankara in the energy sector. Bilateral Turkish-Russian partnership is developing in this area for five promising areas of cooperation, such as energy resources trade, electric power trade, contracts for the construction of energy facilities, mutual investment in the energy sector, cooperation between Turkish and Russian companies in energy projects in third countries.

The defining milestone in supplying Turkey with energy was laid down on December 15, 1997. Russian-Turkish intergovernmental agreement in order to supply 365 billion m3 of Russian gas during a period for 25 years was signed. The realization of this deal is implementing by two routes – the Western and the Black Sea. First is operated since Soviet times. It passes through Bulgaria. The second was opened at the beginning of the XXI century. Its basis is the gas pipeline “Blue Stream“, which runs under the Black Sea. The capacities of both routes are 14 and 14.6 billion m3 of gas annually. Thus, today the maximum annual volume of Russian gas supplies to Turkey is limited to approximately 30 billion m3. Oil has also become an important part of bilateral relations. As a result, in 2011 the Russian Federation has provided 65% of the Turkish demand for natural gas. In the late 2000s, the Russian oil accounted for 33% of Turkish consumption. In 2014 the situation has changed due to the diversification of energy sources – at that time 55% of natural gas and 12% of oil, which were supplied to Turkey, were of Russian origin. In any case, Russia retains its position as an important supplier of energy.

Speaking about the future projects of Russian energy transit network, it is worth noting that gas pipeline “South Stream” had to pass in the Turkish economic zone. The prior consent in this field with Ankara was reached in August, 2009, the final aspects were agreed in December, 2011. However, the position of Europe put an end to this project. Under these conditions, Russia has reoriented southern vector of its energy policy. Now a new project – “Turkish stream” – is in the process of development. On October 11, 2016 Russia and Turkey signed an intergovernmental agreement. “Turkish stream” will transport Russian natural gas to Turkey and further to Europe under the Black Sea. Its planned capacity is the same as of the “South Stream”, reaching a level of 63 billion m3 of gas per year. Of these 14-16 billion m3 have to go to the domestic needs of Turkey, while the other should be transported through its territory to European markets. This project will use infrastructure of other transit pipelines – it will reduce the contribution of Russian companies in this case. As a result, Russia will be able to implement its southern energy plans, fitting the limits of the EU Third Energy Package. 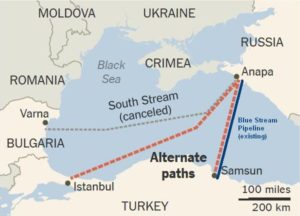 In other areas, the presence of Russia in Turkish energy sector also increases. Russian specialists are designing Akkuyu Nuclear Power Plant for Ankara near the city of Mersin. An agreement on the construction of the four-block facility with total capacity of 4800 MW was reached between states. The project, estimated to 20 billion US dollars, is a kind of leader of the Russian-Turkish partnership. Its implementation is provided on a “turnkey” principle – design, installation and operation of the plant is fully maintained by Russian specialists who will sell the produced electricity on the Turkish market. As a result, Moscow will achieve beneficial experience and will improve a network of the valuable foreign assets. Turkish Republic in return will increase the efficiency of its own energy sector for 10%. Turkey also is considering building a second nuclear power plant near the city of Sinop. Russia is very interested to contribute to the implementation of the project as well.

Ankara dependence on Russian energy certainly has a negative impact on the implementation of Turkish ambitions in foreign policy, where the interests of Turkey and Russia are not the same on several important issues. However, we must remember that Russia is also dependent – on the Turkish currency for gas and oil. For example, in 2010 energy has formed the basis of Russian trade exports to Turkey (73.8%).

Speaking about alternative energy source for Turkish Republic, it is necessary to distinguish two vectors of energy policy. The priority is given to partnership intensification with the Turkic countries of the Caspian Sea. Ankara is primarily focused on relations with Azerbaijan and Turkmenistan. In 1993, Azerbaijani President Aliyev confirmed that Baku want to export oil from the Azeri–Chirag–Gunashli field through Turkey. The next year initiative to build a special pipeline for this project was announced. Discussions continued throughout the 1990s and ultimately led to the approval of the draft transport corridor – Baku-Tbilisi-Ceyhan pipeline. On October 29, 1999 the sides signed the Ankara Declaration, which regulated the transportation of Caspian oil on this route. Work on the practical implementation of the project started at the beginning of the XXI century. In 2006, the pipeline was put into operation. This was the first step in the transformation of Turkey into “energy hub” through which energy supplies go to the EU. Further cooperation of Ankara, Baku and Tbilisi in the field of transit infrastructure was complemented with the functioning of the Baku-Tbilisi-Erzurum (South Caucasian) gas pipeline, which started to operate in 2007. Institutional support for cooperation in this area is formed by such documents as the Memorandum of Understanding on the creation of a consortium to supply gas from the Shah Deniz field, which was signed in December, 2011. Also the transit of electricity from Azerbaijan to Turkey through Georgia began in February, 2016. It should be noted that Tbilisi, being an important connecting link in the implementation of trilateral projects, plays only a minor role in this area, leaving Ankara and Baku with the status of the main initiators of the construction of transit infrastructure. Most clearly it is seen in the case of railway transit route of Baku-Tbilisi-Kars – Georgia did not show appropriate interest in the project, which resulting the construction of the Georgian part of the railway for Azerbaijani funds.

Western partners of Turkey – especially the USA – has ambiguous attitude to these initiatives. On the one hand, they welcome such projects as this helps to supply the world markets with Caspian oil without the involvement of Russia and Iran. On the other hand the Americans are not happy with the growing influence of Turkey in the region and try to put the integration processes under their control. The White House fears that the successful implementation of planned infrastructure projects will strengthen Ankara’s position in the Caucasus and Central Asia too much.

Turkey’s relations with Iran may be another alternative to Russian domination on the national energy markets. The two countries have pipeline connecting Iranian Tabriz with Ankara. It was built in the period of 1996-2001. Its capacity is 11-14 billion m3 of gas per year. However, this vector of energy partnerships was decelerated by anti-Iranian sanctions. Today it is influenced by tensions between the two states because of the war in Syria and the threat of terrorist attacks by Kurdish separatists on the pipeline.

Thus, the infrastructure to supply Turkey with Caspian and Iranian energy resources is already built. However, its transportation to the European market requires a transit project that has to cross the territory of the Republic from East to West. Great expectations in the area of gas transmission were entrusted to the pipeline “Nabucco“. The project of 2004 called for its creation to transport Iranian gas from the Persian Gulf. However, after the intensification of diplomatic conflict over Iranian nuclear program, pipeline was redirected to the Caspian fields of Azerbaijan, Turkmenistan and Uzbekistan. The route “Nabucco” was to combine them with the countries of Southeast and Central Europe via Turkey, which was given the main transit role in the project. The agreement on construction of the pipeline was signed in Ankara on July 13, 2009 by Austria, Bulgaria, Romania, Turkey and Hungary. “Nabucco” was to be commissioned by 2018. Its capacity was to be 26-32 billion m3 of gas per year. However, the increase in cost, numerous delays in starting of work and the emergence of an alternative project – the Trans Adriatic route – eventually led to the freezing of this European project.

This event has no effect on the objective need of the transit pipeline through Turkey. While there are different routes of gas transportation through the territory of European states, the importance of Turkey as the sole alternative to Russia as a transit corridor is not subject to doubt. Today there is a project of the Southern Gas Corridor – Transanatolian gas pipeline (TANAP), which will be the expansion of the South Caucasus route to Europe and can be integrated into the planned Trans Adriatic pipeline. The agreement on its establishment was signed on December 27, 2011 Work on its construction expected to be completed in 2018-2019 years. Initial capacity of the new route should be 16 billion m3 of gas per year; however it will be increased in the coming years to 30 billion m3. They will be directed both to the internal needs of Turkey and to the European market.

Iran also has a project to combine its gas fields with European markets through Turkey. This is the so-called Persian pipeline, designed to transport gas from the South Pars fields to Southern Europe. Its capacity should be 37-40 billion m3 of gas per year. The project was delayed due sanction policy, implemented on Iran. But now it can get a second life.

As we can see, the energy factor is important for Turkey’s foreign policy. On the one hand, this rapidly developing country should ensure its energy needs through imports. On the other hand, the strategic position of the Republic makes it a key element of different transit projects. This affects the Ankara’s relations with key world (Russia, the EU) and regional (Iran) players, the partner states (Azerbaijan).